Please note: Due to scheduling over the holiday, Orders placed between May 29th - May 30th will be fulfilled on May 31st.

Please note: Due to scheduling over the holiday, Orders placed between May 29th - May 30th will be fulfilled on May 31st.

During the fall of 2016, Bad Elf commissioned a research report to test the accuracy of a Bad Elf GNSS Surveyor. The goal of this project was to determine if Bad Elf’s Bluetooth GPS receiver can produce consistent results at 1 meter Circular Error Probable (CEP).

Elizabeth Runkle, intern and GIS student at Maricopa Community College, constructed a methodology to test and verify results for the Bad Elf GNSS Surveyor using Esri tools. This research exercised a complete workflow starting with geodatabase creation, creation a map for use in field data collection, collection of field data, and production of a final analysis of the results. The software used include Esri ArcMap, ArcCatalog, ArcGIS Online, and Collector. Two sets of results were produced that include accuracy achieved in real-time and accuracy achieved via post-processing.

The baseline definition of accuracy that Bad Elf uses is "the degree to which the result of a measurement, calculation, or specification conforms to the correct value or a standard." Contextually, the precision we report is consistent with the achievable results for a Bad Elf receiver; a numeric representation of latitude and longitude to 8 decimal places that represents the practical limit of commercial surveying.

Common measures of two-dimensional results fall into the realm of RMS, CEP, 2DRMS, and R95 as defined below. The measure of probability represents the percentage of readings that will fall into a circle of a specific radius. For example, the Bad Elf GNSS Surveyor has a CEP of 1 meter. The 1 meter CEP specifies that reading over time will be 50% inside a circle of 1 meter radius and 50% outside the circle in ideal circumstances.

Note: Unless an application converts the values produced by a Bad Elf receiver, the reported accuracy is based upon CEP. 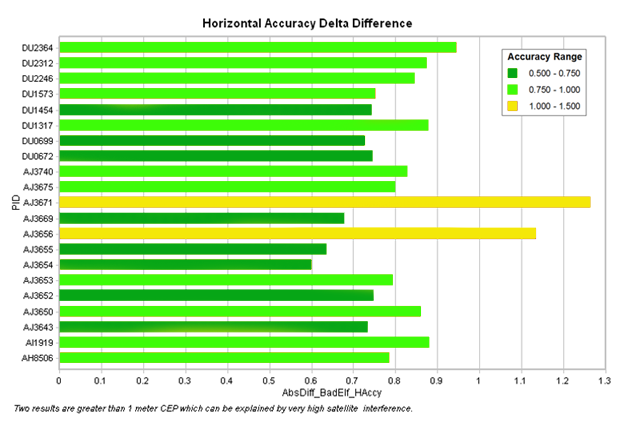 Note: a few points did exceed the 1 meter CEP. These points were the result of a very challenging GPS environment and were expected.

From the raw recordings, Bad Elf retrieved samples to analyze further. Below is an example of a 15 minute capture over the point AJ3650. This recording had 88% of the points inside the 1 meter circle which far surpasses the benchmark of 1 meter CEP. 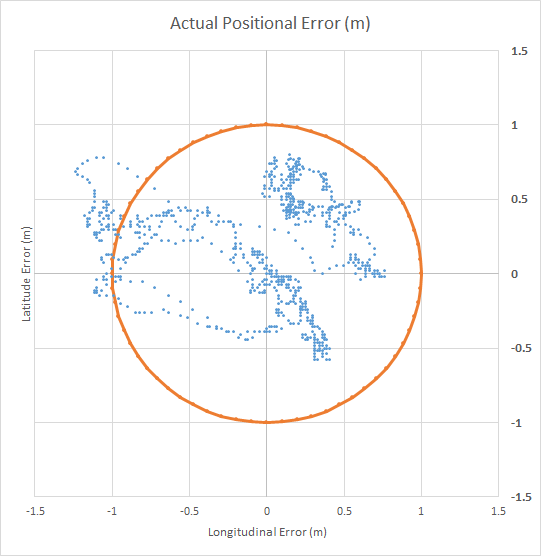 Below is a histogram depicting the actual calculated errors from the known position of AJ3650. From the analysis below, one can make the determination for this recorded session that the Bad Elf achieved a positional accuracy of ~88% within 1 meter of the actual location. 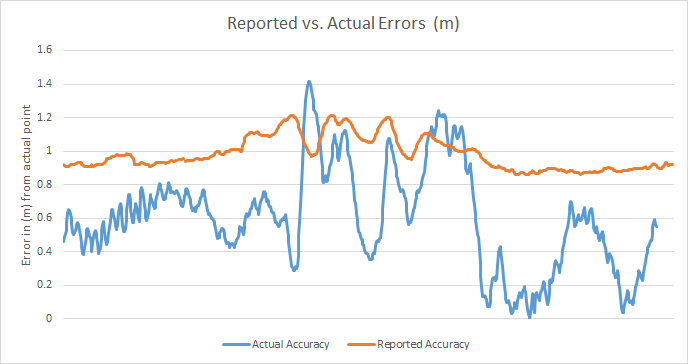